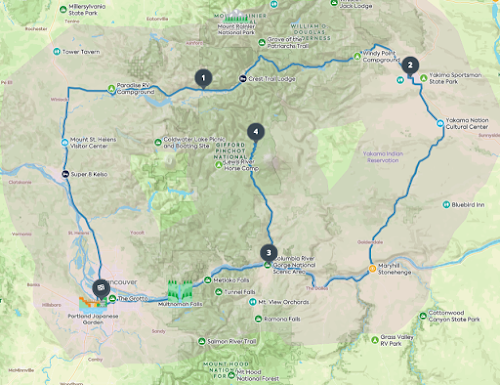 This wasn't meant to a road trip necessarily. I booked a few nights at a small lake near Mt Adams called Takhlakh Lake. I knew there was a route from Hood River and I-84 but I thought I'd be fancy and drop down from Randle, WA.

After getting a later start from Portland, I didn't reach Randle until around 5pm. I noticed a sign about a road closure near there. Fuck, the road I needed, NF-23. And it was closed about 10 miles before the campground. I'm sure there is a way around that would have been a piece of cake in hindsight but I wasn't into exploring at dusk.

My only other thought was to "go around". I ended up driving all the way to Yakima, then down to The Dalles, and back on I-84. I found a room at The Hood River Hotel and made last call for a burger and beer.

The next morning I got an early start and crossed the toll bridge across the Columbia. (I think I gassed up before the bridge.) I found the route up NF-141 through Trout Lake and NF-23 to the campground.

By mid-morning I'd reached the campground; it was like 10am. I'd already missed my first night there but I breathed a sigh of relief to be in the mountains.

Before setting up camp, I opened up the cooler to make a sandwich. Within 5 mins I was getting harassed by persistent and sometime biting flies and other flying insects (mosquitos). It was dry and hot so there was a burn ban but I noticed a nearby camp with smoke drifting out.

My campsite had trashcan near the road and there were wasps and flies flying around it. I figured I'd got a bum site. Across the little camp road was a vacant site. I wandered over with my sandwich to scope it out. No trashcan and only a few insects. There was no shade but I thought it was a good trade off.

I moved the Jeep and continued my lunch on the picnic table. The harassment started to get bad and annoying, to the point where I took my food into the passenger seat and ate in peace inside the cab. WTF!

An idea popped into my head. Setup the tent and open all the windows. The mesh should be good to block the flyers and provide enough airflow. The former was true but the latter was no so much. I sat in there on my low beach chair with beers, a pack of smokes, and my book. It was hot but bearable. I'd get out to cool off periodically. After I added the folded tapestry over the top but left the sides clear, the temperature dropped quite a bit.

I took a spin down to the water for a selfie.

Around dusk the number of bugs hitting the sides of the tent decreased a lot. I emerged cautiously and noticed a pretty good lull. I got some food out for dinner. I didn't have any firewood or I would have tried lighting a fire. I ate another sandwich in growing darkness.

Just as I was replacing my chair with my mattress and sleeping bar, I felt mosquito bites. One, two, three, ... four, five. I put the cooler back in the back of the Jeep (bears?). I wasn't really tired but got in the tent and listened to the high-pitched buzzing.

The next morning, around 6am, I got out of the tent and found a spot to take a whiz. No bugs. I put on my shoes and headed down the camp road to the lake. Most everyone was asleep.

Takhlakh Lake is a small lake. Only a small shore to speak of. It's best for kayaking. There is a trail that loops the whole lake but I didn't take that. I just poked around and drank an energy drink. I got bit a couple of times 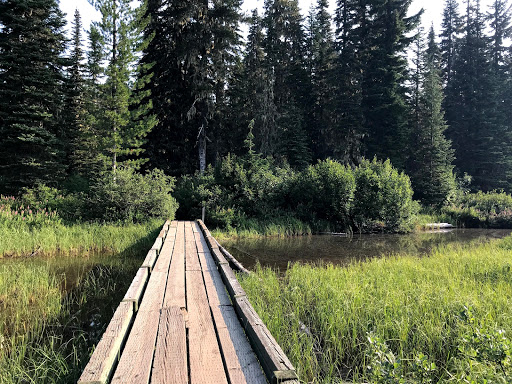 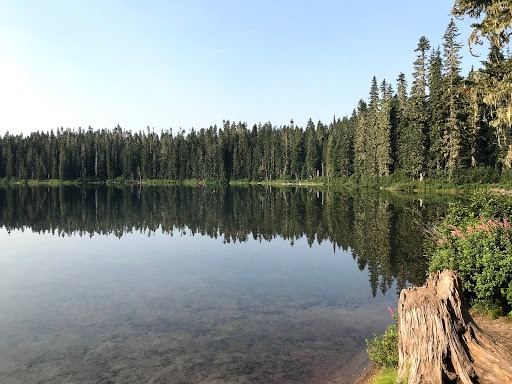 I packed up camp and was on my way but 8am. 1 of 3 nights at the lake. I was a bit unprepared (no bug spray, firewood).

On the way back to Hood River, I missed the turn from NF-23 to NF-141. The road started to get really rough and narrow. I kept going longer than I should have.

Conversation with a Stranger

I got a back to the junction and found NF-141. Not far down the road, a girl was hitchhiking. She needed a ride to Trout Lake. She didn't seem scary so I agreed. Turns out she grew up there. Her car and broken down north of the campground. She knew the area well; she talked about her dad being a shuttle driver for hikers going to a PCT trailhead. She also mentioned a recent lightning strike that hit a tree, and said it was coming up. Sure enough there it was when we came around the corner.

Twenty-five miles later and some nice conversation, we reached Trout Lake. I dropped my ride at an intersection.

My gaze lingered on the rear view mirror for several beats. Then, pulled onto the road, and accelerated to Hood River.

1. Strike 1, The closed road by Randle. I should have done better research.

2. Strike 2, Bugs. I should have had the right supplies. Bug spray, treated clothing, campfire supplies including wood, tinder, water, shovel for proper extinguishing.

I chalked the experience up to learning and a scouting trip. I shall return with the appropriate supplies, equipment, and planning. *(I probably won't since there are so many other choices. :) like North Cascades!)