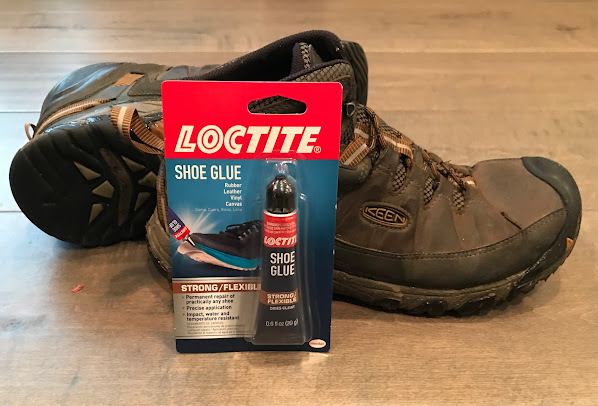 When I started hiking in earnest in 2020, I realized that I needed better hiking boots.

The pair I'd gotten for my Norway trip in 2018 were actually trail runners and were awesome but too narrow. I got blisters by Day 3 which I hand to tend to for the rest of my 3-week trip. I tried thinner socks to give me more room, and thicker ones to get more cushioning but no matter what I tried, they just weren't the right fit.

When transitioned from a casual hiker to avid explorer, I knew I had to make a change in footwear.

I scoured the various "Best Gear" blog posts and reviews on REI and the like to try to get a consensus on what I should buy. I was naturally drawn to keens because of my sandals and they are headquartered in Portland. I settled on the Keen Targhee IIIs. I originally got size 10-1/2 at first but quickly found they were too snug a fit and had a weird "break" over the toes. It was summer and I hadn't accounted for use with thicker socks. I exchanged them for size 11.

OMG! They fit perfectly with a light wool sock. I had room for my toes room to wiggle and they'd work with thicker ones too. (*I've actually switched from Smartwool to Darn Tough; separate future topic*).

In fact, I hiked Silver Start Mountain in southern WA that same day. It was tough hike but the Keens were invaluable. I had great traction and never a hint of blisters.

But, according to the experts, hiking boots of solid construction will carry you for at least 600–700 miles, generally maxing out at 1,000.

What about the fast and light crowd? Well, trail-running shoes go through similar abuse. And many times they step up to do a hiking boot’s job.

“Lightweight-type products like trail running would be on the lower end of the spectrum, at about 400–500 miles,” said Haddad.

Gerritse agreed. As a “rough guide” with KEEN’s hiking line, he told us, “For fast, lightweight products, expect around 400–450 miles.”

The "rub" on my Keens is that the soles are not a single mold design like other boots and my Keen sandals. At around 350 miles, I started seeing bits of rubber peel off on the sides and bottoms. I found reviews where that confirmed this is a known-issue. It was unfortunate and I was kind of annoyed that the glue was failing. It was also an indication that I'd done some serious hiking which pleased me.

I found a tube of Gorilla Glue (their SuperGlue type equivalent) and attempted to slow the wear & tear but I knew, in the back of my mind, the fixes were gonna fail eventually because it was hard & brittle but would delay having to get a replacement pair. I considered stepping up to a mountaineering boot like Salomons, La Sportivas, or Scarpas but wasn't sure it was worth the extra cost, $175 vs $230, $209, $299, respectively.

One thing that made me really reconsider the whole issue. I'd seen one of Joey Coconato's video where we, the viewers, got a glimpse of his boots which were failing spectacularly. He was hiking on snow and his boots were held together with duct tape and had huge holes. Of course, this is pretty unwise to not have proper footwear in any conditions, no less, inclement weather.

According to Les Stroud's Lemon System, this would certainly count as at least one Lemon.

However, I realized I was falling for the idea that you need the best gear to enjoy hiking. Kyle Hates Hiking has video to help beginners avoid the trap.

Ultimately, what was happening to my boots was largely cosmetic. There were a couple spots on the bottom that could potentially compromise the waterproofing but otherwise that was intact; I'd never had wet socks and wanted to keep it that way. The loose rubber parts did not affect the boot's traction or effectiveness.

Again, I took to the internet find a better option than the Gorilla Glue to extend the life of my boots.

Of course, Shoe Goo has been around for a long time and remember using it in the 1980s to fix my skateboard shoes. I'd ground the heels off using them to brake when butt-boarding down hills.

I wanted to try something different and found Loctite on a search. I can't find the article now but one said Loctite is the preferred glue of cobblers & shoe repair professionals.

Alright! Where do I find it? One place is in the Paint & Supplies section of a popular home improvement store.

I'm really pleased with the result. I'll state up-front that I took very little care to a "clean" repair. I literally lathered the stuff on the problem areas. For the spots on the bottom that could leak water, I used a toothpick to get the Loctite glue deep into the spots where the original glue failed.

Admittedly, it looks pretty sloppy but it won't matter after they see some dirt and mud. The more, the better.

After 72 hrs of curing time, it's like a new lease on these boots. I've already surpassed the supposed lifespan of the Keens by 150 miles. It remains to be seen how long this kind of repair will extend my boots' lifespan. I'm optimistic for at least 200-300 miles.

Note: This post is being written prior to any trail testing. I'll update if reality and expectations are completely off.

Email ThisBlogThis!Share to TwitterShare to FacebookShare to Pinterest
Labels: ^ Gear

Take NW Skyline Blvd north from NW Germantown Road. The Skyline Blvd Trailhead is 1.6 mi and a parking are available on right (east) side of the road.

It was earlier than most of my other hikes here: ~12:30p. There were no cars at the trailhead.

Again, the AllTrails app failed to record my hike. Getting lame. And the Fitbit wouldn't track my heartbeat thus didn't capture any zone minutes. Argh!

It was a good hike. I made my usual stop at Benjamin George Collins bench on Wildwood. It notes his passing on Feb 14, 2002 so just a couple of days after the 20 year anniversary.

The people were friendlier than usual. In fact, an older guy stopped to chat about different routes by combining the Wildwood Trail with various Firelanes and the BPA Road. I mentioned I was 1/2 through my loop and that I was heading toward Hwy 30.

The only bizarre thing was I got stuck behind three woman and 5 dogs on the Firelane 12 from the BPA Road. Usually, people hiking with dogs (if they're not jogging) tend to go a bit slower, for the dog to pp or #2. Often a group will stop and let you go by but that never happened, but these three hikers and the dogs was cruising fast and I could barely keep pace. I finally slowed down to put some distance but somehow I kept catching up with the slowest of three.

The bummer part was one of the ladies had a dog that was off-leash and she kept yelling at it every 10 secs when it wandered too far ahead of the group. The peaceful tranquility was repeatedly broken by this hollering. Ugh.

At the Firelane 12 + 15 intersection, I just stopped and let them really gain some distance. It was steep hill and I keep closing the distance. I didn't know what else to do. I didn't want to seem like I was tailing them.

I caught up on the section just before crossing Wildwood. They were all stopped, looking at the trail sign. Two of the dogs came up, wagging their tails. I smiled and held my hand down where they could sniff me out.

As I ascended the steep section of Firelane 15, I could still hear the one woman yelling at her GSD.

While I was back at my car, changing shoes, a guy stopped and gushed about the Jeep. I can't remember exactly, but he said something like "that's a dream rig" "so badass". I was speechless and smiling widely. I mustered a "Thanks" and waved as he drove off.

Definitely a good workout and a rare warm day in February. I still wore the usual layers, best to be prepared for cooler temperatures deeper in the valley. It's a good thing because the snow on Upper Hardy Creek Trail leading up to the Bridge Trail was completely covered but it was thawing. I was able to maneuver without microspikes the whole way, although I should have put them on for extra traction.

When I reached the East Hardy Ridge Trail, it was mostly snow free but when it transitions to the foot path you're back on the snow. There were obvious foot prints so the path was easy follow. I only punched through once to the shin. With poles and careful steps, I managed to make steady progress up to the Phlox Point Trail.

I intended to hike to Phlox Point but about 0.3 mi, the route is not clear, there are so many obstacles to get around, under, over, through. In fact, I finally put on the microspikes. It helped a bit but I didn't feel like it was worth the hassle.

The hike back down was amazing. The light was golden and it was nice and warm on the West Hardy Ridge Trail. I walked for an hour and 15 mins but it seemed longer. 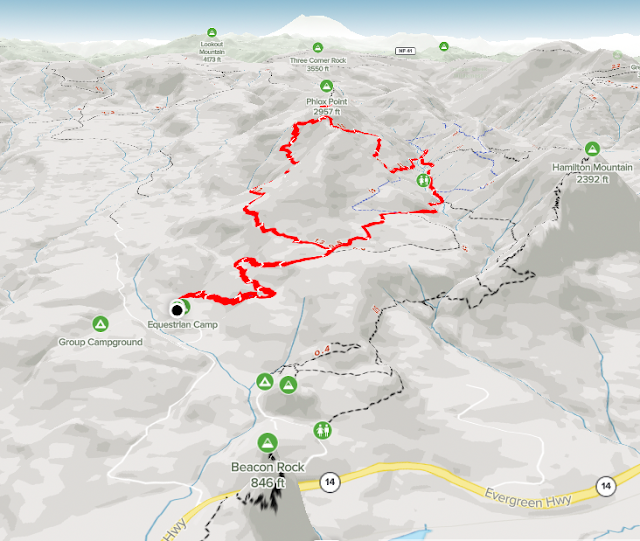 I was kind of surprised to find 4 empty parking spots at just after noon in the main parking lot. There was an attendant and the upper parking lot was open (but full). It's all about timing and the Discover Pass carries some influence over people that pay by the day.

This marks my 5th hike of 2022, 35 miles so for and over 10,000 ft of elevation gain. I've hiked every weekend so far and feel like in good shape to maintain (and improve) my fitness.

The trail from the parking lot to the top is in good shape after lots of snow and wind and blown-down trees. I think there is one tree to clear towards the top, easy to step over.

The ridge from the top to the Saddle is pretty slushy but I still benefited from microspikes. There are several obstacles to get thru, over, around but it didn’t slow me down too much. A couple of tree branches tried to steal my hat!

I opted to take Don’s Cutoff instead of the Equestrian Trail.

I’d already taken off the microspikes and decided I would do without. There was quite a bit of snow but lots of debris (needles, twigs) that gave good traction. I got stopped for a minute and had to check the map. Thank goodness!

There’s a lot of snow on the Hardy Creek trail from Don’s Cutoff and the pit toilet. Pretty normal the rest of the way.