After stopping at Michael's in Gresham near I-205, I wanted to take a spin in the outdoors. I knew Sandy River Delta was gonna be packed but I took a spin through the parking lot. No dice. Out of curiosity I ducked under the freeway and saw lots of empty spots on the Lewis & Clark State Recreation Site on the Crown Point Highway. The trails start on the backside of the grassy area.

About 10 years ago, I hiked the trail above the train tracks. I knew it would be noisy with I-84 traffic noise and noticed another trail that follows the highway and Sandy River. It was short out-n-back but I'd never been there.

To my surprise, it's a popular rock climbing destination. I could hear voices before I could see the people. I noticed lots of chalky crevices and permanent bolted eye rings. There were about 7-8 different groups when I was there. It's only 0.6 miles to the end where there is a huge wall.

Along the way, there was a decently clear view of the Sandy River Delta.

There were several downed trees that have been notched to make it easier to climb over. The boulders where I turned around had a lot work done to clear a fallen Douglas fir; lots of needles everywhere.

Interesting day for hiking. Originally, I was on the Oregon side of the river to hike a route from Larch Mountain Road to Devil's Rest. The road is seasonally closed until late May at milepost 10. There was a little bit of snow on the side of road but otherwise looked pretty good. I didn't reach the gate because a large tree was blocking the road. Some intrepid folks had cut a car width section but I didn't want to deal with fallen trees. I immediately turned around.

My backup plan when hiking in the Gorge was to head to Beacon Rock. I made a quick stop in Cascade Locks to grab some gardening gloves since I'd left my other gloves at home. (D'oh). I crossed the Bridge of the Gods to the WA side and headed west towards Beacon Rock. The parking lot was full of cars and there was a "Lot Full" sign at the foot of the hill for Hamilton Mountain/Hadley Campground. There was a chance I'd find an open spot but decided to make a run at Phlox Point.

The Equestrian Parking lot had a dozen or so vehicles but still several open spots. The weather was warm but I stilled donned my usual base layer and jacket. 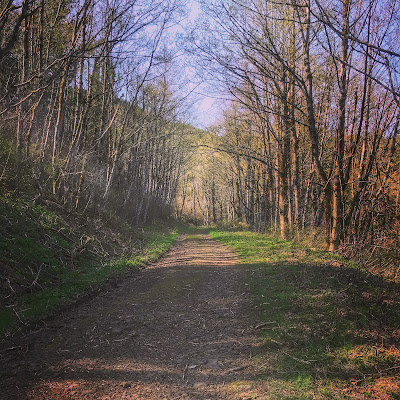 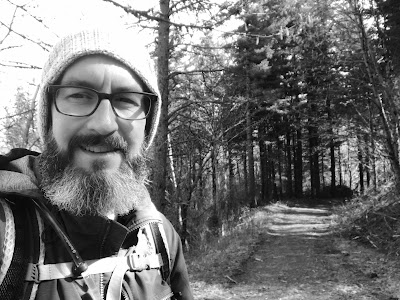 I hiked up the East Hardy Ridge Trail. After the cutoff for the Upper Hardy Creek Trail the snow started to get more widespread. There were spots of exposed trail but lots of hiking on snow/slush. When I reached the end of the road and started on the "foot traffic only" section, it was really snowy. I opted to not put on microspikes but was slippin' and a-slidin' a bit. I'd been noticing canine footprints along the way but figured there'd' been lots of weekend hikers with their dogs.

At the first switchback, I noticed fresh prints and one kind of looked like a (black?) bear print (wider than the canine, deep claw marks.) I tried to rationalize that it was just a large domestic animal and the print was distorted a bit but I still felt uneasy. I'd passed a pair of hikers on their descent earlier but it wasn't enough to convince me.

I turned around and headed back down. I thought I might try getting to Phlox Point via the West Hardy Ridge trail but also was keeping an eye on my knees and other joints. I was glad to be out in nature and didn't want to push it.

In the end, I had minimal pain in my hammies or IT band and figured I'd save my legs for another hike on Sunday. I still hiked about 6 miles and 1,400' of climb. Not bad. I'll be back when there is less snow and it's not a slippery/slushy.

Since the weather was looking inclement, I didn't want to venture up to Phlox/Equestrian or Hamilton parking lots. While it was rainy in the early afternoon, it could change to freezing while I was hiking, no bueno. I considered Table Mountain from the Bonneville Trailhead but it is such a long approach through the flatlands. I decided on Dog Mountain since the trailhead is just off the road and offered some good elevation gain.

The first part of the trail was really nice, no mud but it's a leg burner :). On my ascent, I hadn't seen any trace of snow until pretty close to where the "more difficult" and "difficult" trails converged.

I stopped and put on my pack rain cover, gaiters and microspikes. I also donned my warm hat. In a fortunate stroke of serendipity, I left my usual light hiking jacket at home so I wore my ski jacket. I needed it. I had my light duty gloves but had my ski gloves in my pack. My hands were pretty cold but I stubbornly didn't get the warmer gloves out.

Lots of people on their descent volunteered that the snow was pretty heavy at the top. A few people admitted to being under prepared. In fact, I passed a young couple where were wearing running shows and cotton sweat shirt.

I definitely needed the microspikes between the trail split and Puppy Dog viewpoint. It was pretty slushy and I kept having to knock clumps of debris (a mixture mud, snow, pine needles) from the bottom of my boot.

At Puppy Dog viewpoint, the snow got a lot deeper. There were decent footholes but visibility was poor. A person that had passed me was on their way down, citing the wind. I forged on, determined to get to the top, but then again, I wasn't sure. I kept seeing fresh footprints.

Once I reached a section where there was no wind, I knew I could make it the rest of the way.

After the last switch back, I called out to the little shelter under the trees to see if it was occupied. It wasn't but there was a guy just off to the left in the trees. He acknowledged me and we said hello. He offered his spot when he left.

The apple I had was nearly frozen or at least firm & unappetizing. I adjusted my gear and started my descent.

It was slow progress because it was slushy and a bit slippery despite having microspikes. Eventually I reached a point where I didn't need the spikes. I carried them for awhile and found a spot to stop and pack them so I could use my poles more easily.

At the viewpoint at 1600 ft, I met the guy from the top and other person. We chatted for a minute about the trail conditions.

Somewhere along the way my left leg/IT band was really barking. I stopped a few time to stretch but it only helped a little. I limped the rest of the way. I noticed that hiker behind me getting closer but he never passed me.

So worth the cold and snow. Great hike!

Note: Looks like the Hardy Campground is open for the season. There were a couple of sites with people camping. Definitely going to look into staying out there while there are very few people and take a sunrise or sunset hike.

It's feeling like Spring! I didn't find any areas on the trail with remaining snow, especially between the Hamilton summit and the Saddle.

I also took the Don's Cutoff Trail which intersects the Upper Hardy Creek Trail (between the Bridge Trail and the pit toilet.

I've been working through RA treatment without methotrexate. I took a prescription dose of ibuprofen about 2 hours before my hike and felt pretty darn good. On the next day (Sunday) I had some soreness in my thighs and IT band on the outer right knee but otherwise, I would consider it a success. Good to know if I plan on a longer hike like Pumice Butte or Coldwater Peak or Mt Adams or MSH summit, I should be able to alleviate symptoms temporarily before they happen.

I loved hiking later in the day than during the Fall and Winter. The time change back to standard time and tilting of the earth allowed a later start (~2pm) and gorgeous golden light when I reach Little Beacon.

There was almost no wind at all. I was so quiet and peaceful. <3