The Day Before the Trip

This road trip was intended to be part sightseeing on the coastline, part traveling to a concert. It was Coldplay for their 2nd of a two night run at the Warfield. I also had a ticket to see The Meters at Shoreline at New Orleans by the Bay Festival.

I was summer and what better way to maximize this experience than take a convertible.

I hopped on the Car Rental website (Budget, Enterprise, Alamo, etc) and reserved a convertible Mustang 5.0. Where do you get a usually get a rental car? The airport. I had my buddy from work give me a ride to the San Diego terminal. From there I grabbed the Rental Car shuttle to their offsite location over by The Casbah on Kettner.

When we pulled into the parking lot, I scanned the parking lot for my ride. I didn't see it but just thought it was getting cleaned from a previous rental. I waited in the lobby from my turn at the counter.

I told them I wasn't interested and walked out in a huff. This car was the basis of this road trip.

Now I'm stuck on foot on India Street wondering what to do. I found the Car Rental Cafe a few blocks away. They had a convertible Mustang 5.0 in the parking lot and it was available for rental. Woohoo!

While I filled out the paperwork, they pulled it up to the office and got it ready for me. This was an independent rental place so I had to leave a larger deposit and the cost was more than Big Chain Car Rental but it was an easy choice. Like I said, the car was the basis for the whole trip!

I drove back to my place in OB to get ready for an early morning departure the next day.

BTW, I found out a few days before that Coldplay had canceled second night of The Warfield.

My recollection is out of sync with the calendar. I recall this was a weekend trip. I was going to Coldplay on Saturday at the Warfield and the Meters show was the Sunday. According to my internet search, Coldplay was scheduled at the Warfield for June 20+21, 20011 but only played the 20th2. The Funky Meters headlined the New Orleans by the Bay Festival on Saturday June 23, 2001 at Shoreline3. Maybe I stayed with my cousins on Friday 6/22. IDK.

I recall driving through LA traffic and seeing the Hollywood sign. I was jamming music & smiling while others were expressionless going to their job.

It's always so great to transition from the 7 lanes to bumper-to-bumper traffic to Ventura to 4 lanes to Santa Barbara to 2 lanes. By Hearst Castle and 1 lane each direction, there are few people or cars. So relaxing on the eyes to just absorb the views of the ocean and trees.

I hugged the coast all the way up to Mountain View, I think. I might have even driven by the Excite@Home HQ.

Night on the Town

Since the Coldplay concert was already canceled a few days before, I went to find some alternate entertainment. I took a cab to Geary Street and Fillmore. I found a Japanese restaurant and got some sushi. I considered looking for strip club but saw people lining up at a music venue. I wandered over to take a look.

It was the Boom Boom Room. John Lee Hooker's bar. I remember seeing him in San Diego at Humphrey's by the Bay. As fate would have it, he'd passed away that very day, June 21, 2001 (RIP JLH)4. The Queen of Detroit Blues, the great Alberta Adams, was performing.

I remember standing in there, sensing the energy, quietly express my reverence. Mr. Hooker's booth next to the stage was empty. I don't recall any signs or anything. People just knew.

Ms. Adams acknowledged John Lee Hooker's passing and the gratitude to perform in his bar. I think I have her CD somewhere. (There's a little BB in the CD case.)

New Orleans by the Bay Festival 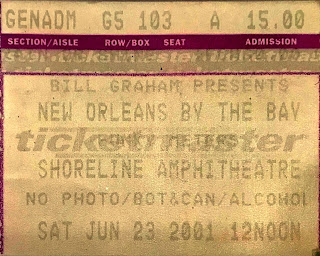 I remember sitting on the grass in the amphitheater to see show. I also got some New Orleans cuisine from the one of the many carts.

I knew I still had a long drive back to San Diego so I cut out. I'm not sure how I saw the Funky Meters headline AND still do an 8 hour drive afterwards. My memory.