My Fitbit says I traveled 4.13 miles and 9,044 steps but that also includes a few steps in Hood River, and the walk to and from the Rowena Plateau trailhead.

Gorgeous day for a hike with Holly & Brian and the doggos. We met in Hood River at NYC Sub Shop to grab some sandwiches. We all got the Manhattan (ham & salami), yum~.

We drove out to Mosier, OR via I-84 (Exit 76) and wound our way back to the Rowena Viewpoints and Tom McCall Reserve and stopped to scout out the Rowena Plateau for next time.
Then, we continued west on Hwy 30 to the Mosier Plateau trailhead. I saw cars near the trail sign and immediately parked on the shoulder. It was a pretty tight sqeeze trying to stay off the pavement but we managed. (Turns out there is a big parking lot on the other side of the 1-lane bridge.)

It's a narrow trail but everyone was cool to let us go by or vice versa. It's an easy hike with lots of switchbacks. The views were amazing and lots of wildflowers were in-bloom. 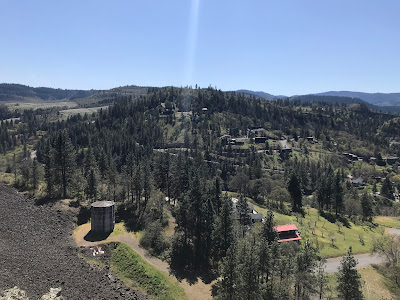 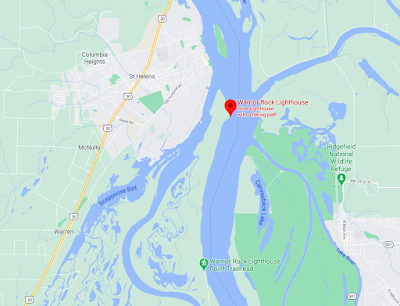 From Hwy 30, cross the bridge to Sauvie Island and head north passed the store. Turn right onto NW Reeder Rd and take it all the way to the end. Just before the beaches, the road turns to dirt. There are big sections of washboarding.

A parking permit is required on the island: https://sauvieisland.org/visitor-information/park-permits/

This time I didn't stop at the lighthouse because there were some people over there already and I figured I'd give them space since I'd seen it before last Sept 2020.
When I reached the cove where the lighthouse is, I continued north on beach. I was going to see if I could get around the other side to see St Helens and the courthouse where the bell and 1/2 scale light is located but gave up when the shore sort of ran out.
The tide was really low on the Willamette so there you could see well beyond the shoreline. I stopped briefly at this concrete structure that seemed like a bunker/lookout but there was just sand underneath.

The parking lot only had about 10 cars. The lot is dry and clear of snow. A couple of visitors asked about the road being closed. LOL.. umm.. snow. I told them to try back in July.

I opted for my winter boots and YakTrax, snow shoes were not needed. I forgot to swap out the feet on my hiking poles (I should have used the baskets). The trail was hard packed for the most part but the sun was making is slushy in spots.
It was a great workout and I keep moving except for a brief stop at the fishing pier. I was surprised I still have some reserve energy since I'd done the Hamilton Mountain hike the day before (6.5 miles). 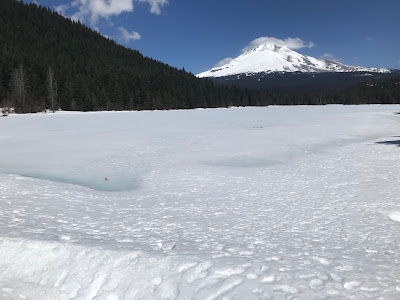 I recall the first time I came here. I didn't know anything about the trail and was tromping around, crossing over (and probably damaging) the cross-country tracks. A couple people made comments then but I didn't understand what they were trying to tell me. Fucking oblivious newb :D. (there's a sign new the trailhead that states that walkers and snowshoers are to stay on outside (L) and cross-country skiers on the inside (R).
Then, there was the time I went out there in the afternoon and taking a circuitous route back to the truck. I'd only done the full loop once. There were some cross country skiers going the same direction but since I was in snow shoes I was soon alone on the west side of the lake, in the trees. 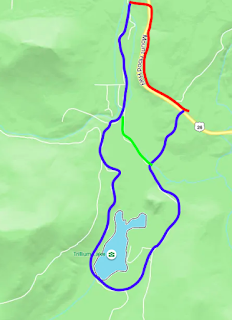 (Clockwise: The blue line is the route I took around the lake, the red line is the "escape route" back to the parking lot, the green lines is the segment that I missed).
Passed the A frames there's a right turn (green line) that I missed that takes you back to E Road 2656 and the parking lot. I ended up walking along a snow mobile road (E. Perry Vickers Rd), heading north towards Gov't Camp. (This was before iPhones but I got a Garmin GPS after this incident.) The skies were clear but it got dark fast when the sun went down. Fortunately the moon was out so I was able to follow the trail without a light. I had enough sense to bring extra clothing and some food but I was running on adrenaline, trying not to panic about being lost. I keep thinking the parking lot was around the next bend.
It could have been ten minutes or an hour but I finally heard some trucks going by on Hwy 26 somewhere above. so I just scrambled up the 45 degree hill until I reached the road. I walked along the shoulder back to the parking lot (about a mile). Mine was the last vehicle. I wonder how long before anyone would have noticed and come to look.
Looking at the map, I'm guessing I would have hit Hwy 26 in short order but still a reminder to trust maps not intuition and make assumptions. That's how we got lost at Coldwater Lake.
at April 13, 2021

The parking lot was marked “full” but there were 2-3 open spots by the time I got there.

Less muddy around the falls, not many people on the trail, maybe 20 people and 1/2 dozen doggos.
The summit is just where the trail begins to head downhill. Lots of bushes but great views of Mt Adams, Mt Hood, Stevenson, and Bonneville Dam.
Trail surface was mostly dirt & clay with some sections of super coarse gravel and embedded rocks. It’s very technical around Little Hamilton. 3-points at all times. 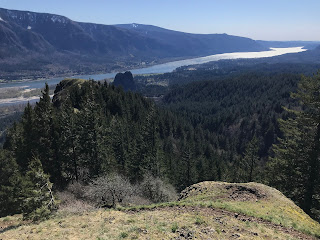 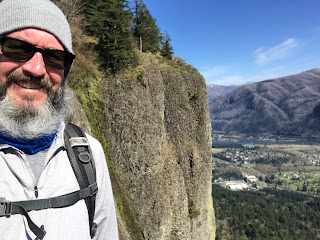 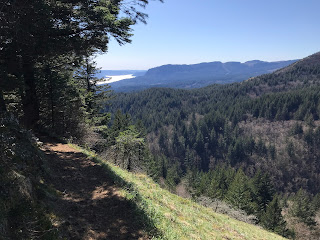