This time I got there just after noon. I knew I had plenty of time. This was my first hike after summitting MSH.

I passed a couple of riders / horses on the way up, on the Equestrian Trail. I got to the Hardy Ridge trail and the terrain got steeper and more narrow.

When I reached the junction to keep heading to Phlox Point, there were a few people enjoying the views. A pair of hikers passed me and our paces were equally matched.

At Phlox Point, they had already started their return trip but paused to sit and take it in.

I had the "top" to myself. The air seemed a bit hazy and I felt slightly short of breath on the ascent. It cleared up after I had some water & a snack.

When I was within 100 yrds the couple got up and continued their descent. This allowed me to enjoy the view they had for a few mins. It was a good spot but I was ready to get going.

Back at the junction, I crawled out to a small outcrop to enjoy the solitude.

Instead of making the hike a sort of loop like last time, I returned the way I'd come.

It's interesting. The journey back always seems longer. Even though it's "familiar" terrain, you're viewing from the reverse angle. Plus, that feeling inside that drives you to the top is gone. Then, it becomes a game of 'get down safely with no injuries'.

However, on this hike I started having troubles with my IT band on the right side. It happened on the MSH descent. I thought I'd "licked" that problem but it has reared its head.

Not sure if it went away because I was hiking so much and now I'm not on the trail as much and rarely stretch sufficiently.

Anyway, I need a new "goal" to give me the drive I had over the summer as I was preparing for the MSH summit trek.

I do have Mt Adams in my sights for next year, just maintaining the good shape I've gotten myself to should be enough but I need something else.

I left Portland around 12:30p and stopped New Seasons to get some supplies. The drive to Climber's Bivouac takes about 2 hrs if you go through Cougar.

This time I took the extra time to go passed Merrill Lake. I stopped at the campground to take some photos.

I was there early enough at the campground to have my pick of campsites. I parked at one and started to get settled but a couple was leaving across from me and said "this one is a good spot". They all were but I moved over there anyway. I didn't even set up a tent. I just made a cocoon in the back of my truck. 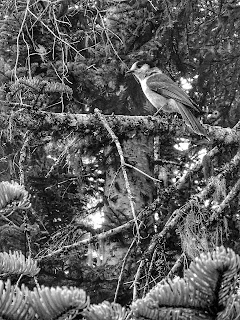 I passed the time by snacking, listening to Alan Watts, and observing the birds that were everywhere. I even feed them some almonds.

About 6pm it was getting darkish and I have a horrible thought that I'd left my garage open. I tried and tired to connect to my cameras or garage app. The cell signal was poor but not out but my efforts were in vain.

I threw what I had in the back and started driving down the hill. I'd was planning to drive to Cougar to check the camera or app. Fortunately, just a few hundred yards down the hill the cell coverage really improved. I was able to confirm my place was locked and secure.

On the way back to my campsite, I stopped to snap this photo:

I really didn't sleep well. The slight incline was enough that I keep sliding down in my sleeping bag. Argh! :)

Around 3:30am I saw the high school kids across from me were stirring (headlamps). (Turns out they were going for a sunrise summit). I waited for another couple hours. Around 5:45-6a some cars arrived and I could see some lights at nearby camps.

I finally just got going around 6am. By 6:30a I was ready to go and walking to the trailhead to sign in.

I filled out my information (permit number, # in party, etc) in the trail register.  Holy shit. This was really happening!

The first 2 miles is easy through the forest, a good warm up. I saw two groups but passed them.

When I emerged from the forest and onto the rocks in the Restricted Zone, I didn't see anyone for awhile.

It was challenging but I finally saw one guy a couple hundred yards ahead of me. I kind of followed his path between the trail markers (lodge poles).

In the middle of the rock field, I saw more people. By the time I reached the ash section, there were about 10 of us on the trail. The ash field was the great equalizer.

I was the last in the group but matched the rests the guy closest to was taking.

It was mentally taxing but soon I was seeing the others reach the rim and spread out. The people got bigger and bigger (my only way to judge the distance).

My last few steps were incredible. All the preparation and effort to get there was about to pay off.

It took me 4 hours to get up there. I spent about an hour at the top. I was exhilarating to continue to the 'true' summit. I saw a person way off in the distance at the cairn. The three older guys I saw were heading there so I did too.

It wasn't without some hesitation. I began to rationalize NOT going but I was so early, around 11am. I said to myself "I'm going for the Deluxe Tour". I'm not coming all this way to not explore EVERYTHING I could.

I was slow going through the rocks. I knew beforehand but climbing down is a bit more sketchy than climbing up.

I sorta lost the trail for a bit but found some alternate routes. Those three guys I'd met were cruising down straight path while I wormed by way down between the lodge poles. I traversed over there and knew instantly why it's a downhill only route: deep sand/ash.

I was so stoke to reach the forest. I was mentally fatigued from climbing over the rocks.

I reached the trailhead around 2:30p. Total Time: 8 hrs (almost to the minute).

The usual. See previous posts. Take WA Hwy 14 from Washougal to Beacon Rock, then to the trailhead on the road to the campground.

This was my last hike before the "big" one. I was just interested in getting some more practice, conditioning, etc.

Additionally, it'd been awhile since I last did the loop through the Saddle. In fact, for future reference, I found the trail to the top of the mountain, I think.

On the descent, I took the Equestrian trail to the Hardy Creek trail; last time I took Don's Cutoff.

This time I skipped Little Beacon. Maybe next time.