I opted to bail on the Lade of the Lake boat trip to Stehekin. It was kind of a shit show with boats, bathers, most not wearing masks, etc. So I scouted a hike. I'd originally been searching for trails in the forest above the southwest side of Lake Chelan.

I noticed several routes on the northeast side of the lake. I noticed one had a long approach by forest road and had a destination to a lake with lots of green and white on the map (trees and snow). Three birds, one stone: some gravel forest roads for the Jeep, an awesome hike, and a short preview of the Scenic Byway. (Actually you're on Hwy 153 until Twisp when it intersects with Hwy 20).

I was smiling ear to ear as I left the brown, dry region and climbed into the forest. It was still only about 9am and I passed a couple of vehicles coming down. It was a well-maintained road but I threw it in 4WD anyway; gotta exercise that part of the transmission and drive train and it seemed like the Jeep was a little bit more stable on the loose surface with rocks and potholes.

I was a little surprised to find the parking lot nearly full, including a couple of trucks & horse trailers. I found one parking spot in the shade off the main parking area. I had to back down the road as it was a tight squeeze.

I geared up and started on the trail. The first mile was just silt and fine dust, probably from the horses and dry weather. I soon reached the junction and started my ascent. I'd was behind a guy on a mountain bike who stopped suddenly and went back down; apparently having taken a wrong turn at the junction.

I only saw a few hikers on their descent. Again, one group was a family of four, mom and dad and two boys about 9 or 10 y.o. "If they could make the hike, so could it" I thought.

The trail was a bit overgrown in spots and I did my best to whack some of the branches out of the way but it really required a machete.

Towards the top of the route, you get to a series of steep switchback through big boulders. Once you get passed that there are some amazing views of the valley below. It wasn't long before I reached the first lake. I saw the fire ring and stone seat someone had made. I still didn't realize I was at the lake because the water was still and blended with the color of the sky.

I didn't bring any insect repellent but threw on a mosquito net over my head. The flies and other bitey insects would not leave me alone. I found a small trail to the water's edge to take some photos. I tried to find a path around the lake but there were a lot of fallen trees. I did go for a little bit but was getting bitten on my hands and where the net was close to my forehead. I'd planned to have my lunch at the lake but figured it'd be more pleasant at the rocky overlook.

I found a big boulder to kick it at. I took off my top layers to dry. While I was far from the lake, the bitey critters were still infatuated with me. I quickly wolfed my sammich and put on a dry shirt from my bag, the other one hadn't had time to dry.

Just after I had descended the rocky switchbacks I passed a woman and her two young daughters. These encounters were a bit of a reality check. I had my badass Jeep and all the hiking gear, thinking I'm such a rugged adventurer. Meanwhile, these three had done the same hike with a sweatshirt and running shoes. Color me impressed. I also knew they were going to be eaten alive at the lake and warned them. I estimated they had 45 mins left to the first lake.

I didn't see anyone else until near the bottom; a mountain biker who I let go by so I could assume my leisurely, tired pace.

“Crater Creek Trail # 416 is popular for hikers, horseback riders, and mountain bike trail users. The trail stays close to the creek as it climbs up through a series of Ice Age basins to Crater Lake, surrounded by subalpine forest and wet meadows. Last 0.75 mile is mostly level with good views. Horse camp is 0.25 mile from lake. Trail is open to hikers, horses and mountain bikes (closed to motorcycles). Bicyclers, and hikers yeild to horses when meeting on the trail.”
Source: https://www.fs.usda.gov/recarea/okawen/recreation/hiking/recarea/?recid=59163&actid=50 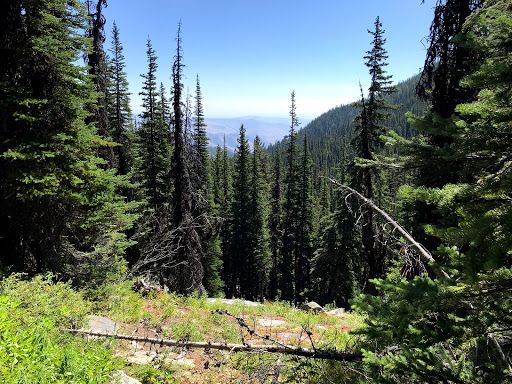 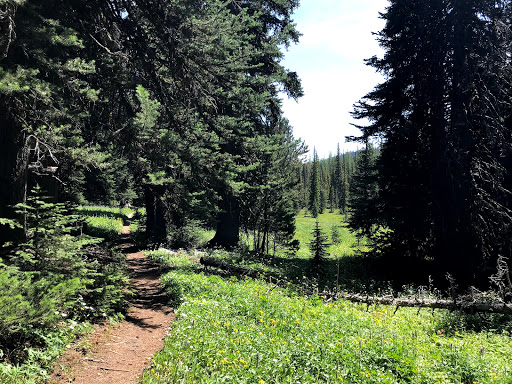 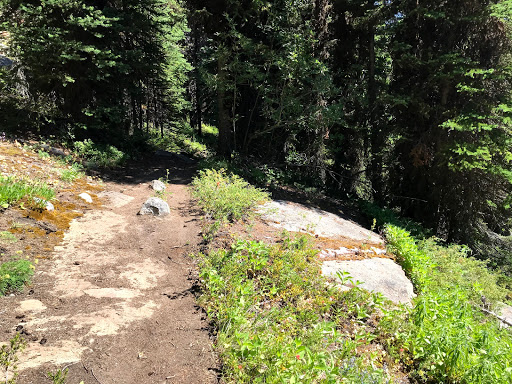 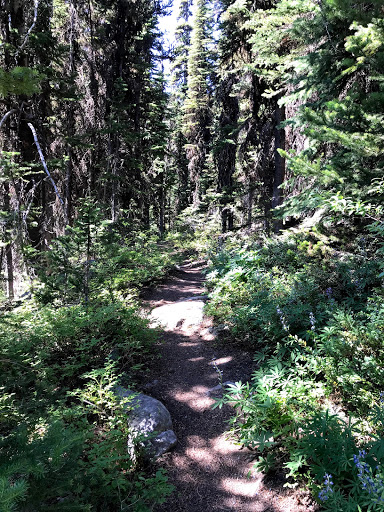 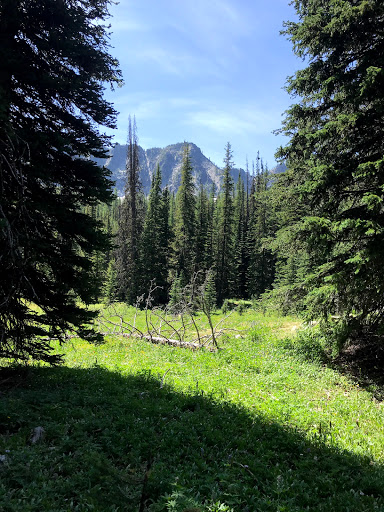 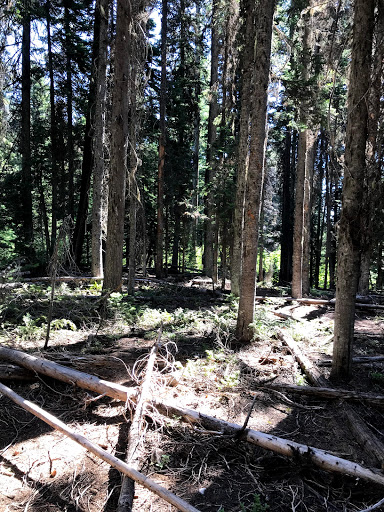 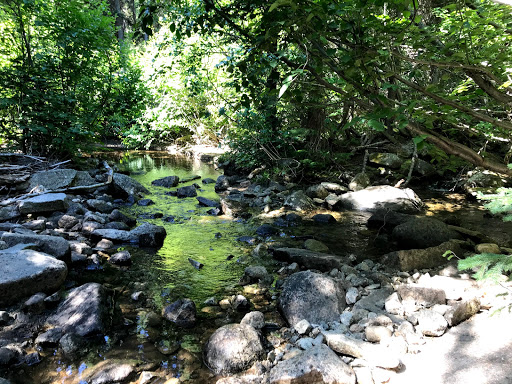 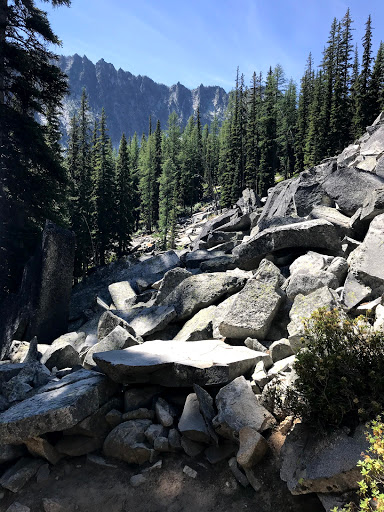 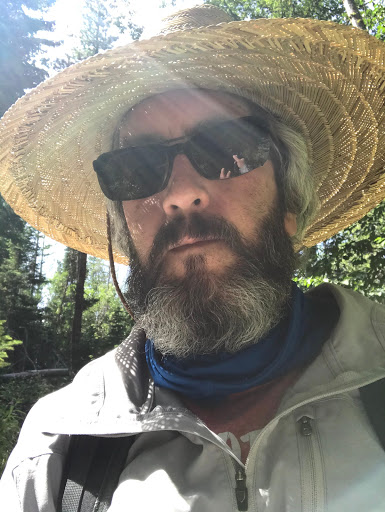 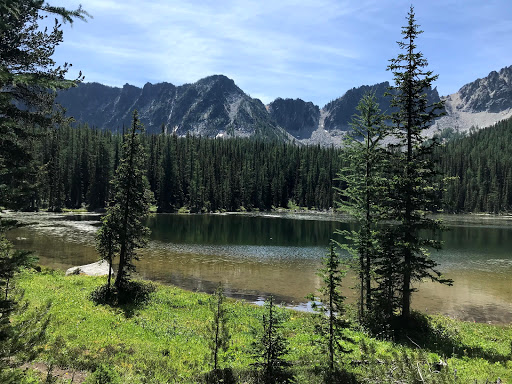 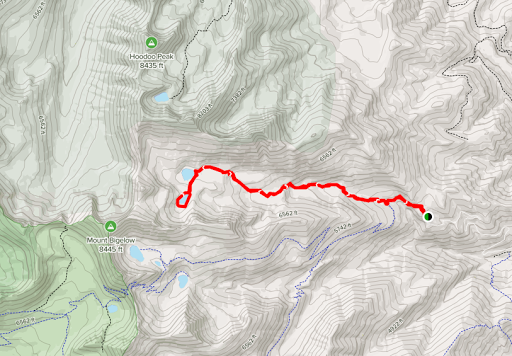