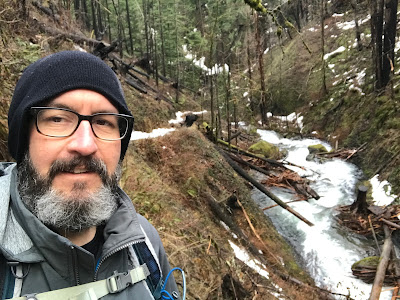 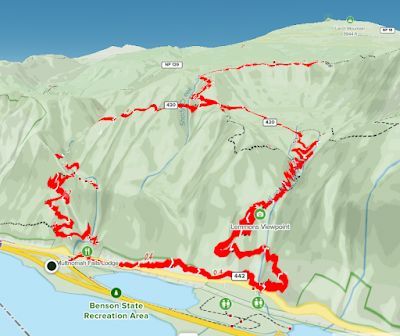 From Portland, take I-84 eastbound. Exit 31 for Multnomah Falls (via the left lane) is 14 miles from Troutdale, OR.

I knew the parking lot was going to be busy but I was able to find a few empty spots including one near the tunnel to the lodge.

I briefly considered going up the Multnomah Falls trails but I read some trail reports that recommend the counterclockwise loop, starting at Wahkeena Falls.

I left the crowds behind and walked along the old highway toward Wahkeena Falls. There was a trail that starts just past the end of the bus parking. This was just a taste of the conditions to come, icy and slippery.

When I reached Wahkeena Falls, you really start to climb. There are about 11 switchbacks to Lemmons Viewpoint. Once you start heading up the ravine, there is a lot more snow and ice. Microspikes for sure.

There are a bunch of waterfalls up Wahkeena Creek and a series of switchbacks. It's really incredible and serene. Beautiful with the sound of water and all the snow on the hillside.

It's about 1000' of elevation gain over about a mile and a half to the Devil's Rest junction.

From here, there's not much elevation gain. I saw a few hikers going in the other direction from Multnomah Falls.

I skipped the Vista Point detour but noted it for another time.

Since I'd gotten a decently early start, I considered if I had time to go up to Devil's Rest when I got to the second junction. I did!

I started up the trail on the 3.2 miles detour/side trip. I encountered the same snowy/icy conditions but found a lot of dirt/mud as well. When I reached a flatter section, there were lots of trees down across the trail. After a dozen or so, I checked my progress. I was still only about 1/2 way there. I thought about continuing and returning to the Wahkeena Trail but wanted to continue to Multnomah Falls.

I turned around and mentally bookmarked this route for another time. I do recall hiking up most of the way to the Devil's Rest years ago. I have a photo from up there. I know I've also hikes up Wahkeena Creek, maybe part of the same hike years ago. Phaedrus remembers.

I made it back to the Wahkeena Trail and onward to the Larch Mountain trail back to the lodge.

The trail was easy. The weather was nice and dry.

I had no idea what was coming next.

When I started my descent along Multnomah Creek, it was still business as usual. I was following another couple of hikers and a golden retriever. I stopped several times to take photos.

The trail gets closer and closer to the water. As I got near the spot where the trail goes under the cliff, I realized that couple was stopped. I quickly realized why; they were contemplating a challenging section of the trail.

It was completely covered with ice and it was solid slope into the water. No margin of error. Turns about this is above a big waterfall.

I watched the couple and the dog make it safely across. I thought 'I really hope this doesn't become a rescue situation for either of us'. Phew I made it.

I briefly took off my microspikes when the trail was clear only to realize there were still challenges ahead.

There were more spots on the trail where slipping meant going over the cliff into the water below. I calmed my nerves and stayed focused on each step.

I finally reached the end of the difficult section. There were 4 people where are not equipped (tennis shoes, no poles) that were stopped for me since the trail was single file. I warned them that it was sketchy behind me.

This is where the trail is paved. I went down to the waterfall viewpoint. I had it to myself.

I encountered more and more people on the last section to the lodge and parking lot. 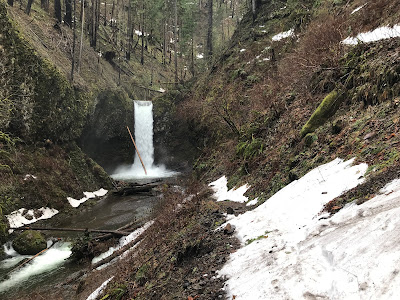 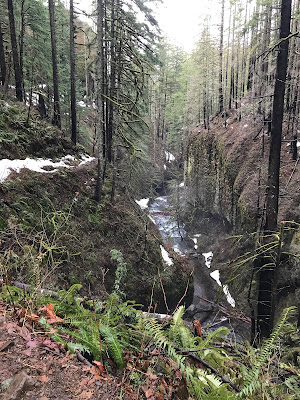 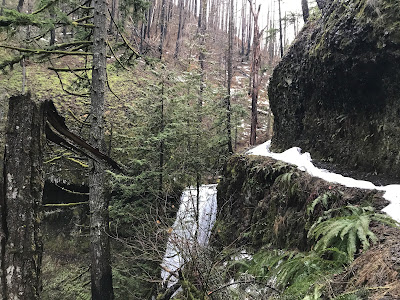 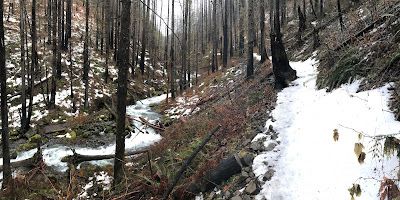 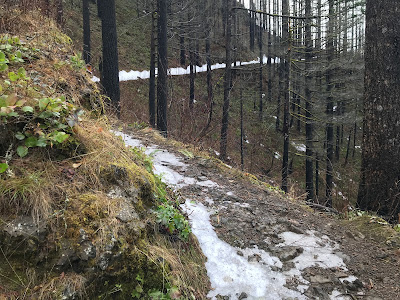 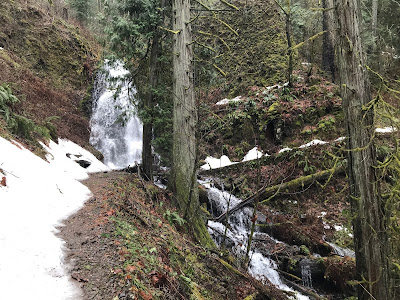