My detour to the store cost me a precious 1hr and missing the on-ramp to 205N didn't help.

The skies were overcast and I knew from the forecast & weather updates that it was snowing around Cougar and Toutle.

There was a high probability that:

I really wanted a hike, not a road trip so this was not a great choice.

The drive up wasn't bad, weather-wise, until just passed Kalama. The rain really started coming down and continued all the way Castle Rock.

I pulled into the gas station/McD's and used the facilities. Once back in my car, I stared at the weather report again and considered alternate hikes around the area. Still not convinced, I headed toward MSH anyway. After I mile or so, I pulled over. Nope.

I was burning daylight but I could still salvage the day if I head back south.

I drove back to the freeway and returned to Vancouver.

I took 205S to WA-14. I still didn't know where I was going. I considered Cape Horn but decided Hamilton Mtn was "the one". I was pleasantly surprised to find so many cars in the lot. It was dark and foggy but I was ready.

A hiker stopped by as I was gearing up and said it was amazing at the top. "Huge snow flakes." She said she'd been up there many times but never it seen it so beautiful.

I saw an older couple just below Rodney Falls but the trail was mine until the switchbacks. (Actually I passed lower down a guy that didn't reply when I said hello. I find that so bizarre.)

On the Little Hamilton section there was a group of 5: two teens, a younger kid that was fussing with a root in the middle of trail (his older brothers scolded him for not getting out of the way), and a couple (college age?). They were uncomfortably closed to the edge of the cliff. When they saw me, they tried to make room by inching even closer to the edge. JFC! I stopped and beckoned them to move to a safer spot. I didn't need that much space to get by. Yikes!

It wasn't clear if they were continuing up or on there way down.

I had the rest of the ascent to myself and made quick work of it. There were some great views from here: 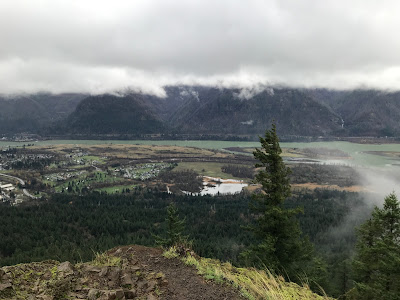 I could tell from the surrounding mountains that the top was likely be dusted with snow. 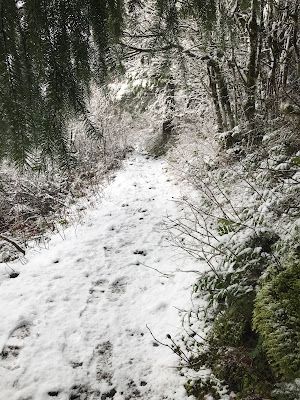 The last section of trail was snow covered. I didn't get any falling snow like the hiker mentioned but it was spectacular. After having hiking this trail so many times in the last year, it was great to see it like this. I stood in spot where I'd cooled off with my straw hat, only this time I was bundled in damp but warm clothes.

I wanted the extra distance that the loop provides but I'd lost a couple of hours of daylight driving up to Castle Rock. I said "if I reach the top by 3pm, I'll do the loop". In fact, I made it by 2:55p. I paused for a min or two then continued along the ridge toward the Saddle.

When I emerged to the clearing, there was a couple and a dog having lunch. I walked to the edge and snapped a couple of photos. They asked about the trail to summit. I wished them well and continued on my descent.

The descent is a great time to mediate. After the climb and knowing it's all downhill, I find my mind wanders sometimes, but more often I'm just in-tune with the sounds around me. My hearing was muffled behind a headband, wool hat, and hood of my jacket. I heard a few rustles in the bushes that were definitely not birds. More like falling branches but it could have been a deer or other larger animal. I'm not sure if there are cougars or bears in the park.

Since I've been on the trail so many times, it's become a bit routine and I don't pause enough to enjoy where I am. Well, today I did stop to look back at the trail. There was some night light filtering through the clouds, and canopy. It's incredible that this route is carved into the forest. What a gift. And to experience it through all the seasons this year.